Archive for the ‘downtown’ Category

ASHEVILLE, NC – The Asheville Downtown Association is excited to announce its inaugural Oktoberfest on Saturday, October 10 from 1-5pm on Wall Street.

“Our Oktoberfest will mix Bavarian traditions with Asheville’s eclectic vibe,” says Adrian Vassallo, event organizer and ADA treasurer. He adds, “With Asheville’s recent recognition as ‘Beer City USA,’ the timing couldn’t be more perfect to celebrate our local beer scene. Plus, Wall Street is an ideal venue for this event with its old world feel and original cobblestones.”

The event will feature beer tastings from local breweries including Highland Brewing, Asheville Brewing Company, Pisgah Brewing, Green Man Brewery, and French Broad Brewing Company. Many brewers are featuring seasonal ales for Oktoberfest, and will be on hand to discuss their beers.

Also, Wall Street restaurants Cucina 24, Jack of the Wood, and The Market Place will be preparing authentic German food fare served with local mustard from the Lusty Monk.

Entertainment will cross the Bavarian-Asheville divide as well with the traditional from The Stratton Mountain Boys and the eclectic from Asheville’s own The Goodies. The Stratton Mountain Boys have brought the haunting sounds of four alphorns, happy yodeling songs, shoe slapping dances, and lively spirited Polka music to audiences across the U.S for more than 30 years. The Goodies are the epitome of Asheville’s funky and diverse music scene playing a gypsy-style eclectic hard rock and funk. Their live performances are known for being theatric and vaudevillian.

The entertainment doesn’t stop there. Festival-goers can participate in one or more of the many fun contests including yodeling, a costume contest, a stein race, and more. Prizes will be awarded.

Tickets are $25 and include beer samples and a commemorative Oktoberfest glass. Tickets will be available August 31 at ashevilledowntown.org. Space is limited, so purchase early.

The Asheville Downtown Association is a membership organization committed to being the voice of downtown.

ASHEVILLE, NC – The Downtown Commission is looking for volunteers to serve on a Downtown Master Plan Action Committee. Members of the committee will work with business groups, nonprofit groups, or city staff to assist with accomplishing the goals in the Master Plan. The committee will be made up of five sub-groups: Arts and Culture; Historic Preservation; Transportation and Parking; Urban Design and Development; Downtown Management. Some of these strategies rely primarily on the private sector; in others the city is primarily responsible. It is anticipated that each sub-group will be comprised of no more than seven members.

p>”We’re looking to cast a wide net as we did in the planning process,”said Dwight Butner, Vice-Chair of the Downtown Commission. “Anyone who is willing to help work on policy, programming or other downtown development issues and is ready to roll up their sleeves is welcome to apply. We’re excited to begin putting the plan into action.”

The full committee will meet periodically in addition to ongoing meetings of the working groups. The committee is expected to kickoff in late September or early October.

Interested citizens should send a statement that includes their name, contact information (including mailing address), any specific skills and/or roles that they have in downtown, and an explanation of why they want to serve on the committee. This information should be sent to Sasha Vrtunski [email protected], or faxed to 828-232-4506 or mailed to Office of Economic Development, 29 Haywood Street, Asheville, NC 28801. Deadline for submitting is Tuesday, Sept. 8. For more information contact Sasha Vrtunski at 230-1271.

ASHEVILLE, NC – With the continued economic vitality and growth in the downtown area, Asheville police have seen an associated increase in calls for service in the Central Business District (CBD).

In 2008, officers assigned to extra duty downtown (called “augment”) handled more than 4,247 such calls, while also making more than 4,680 business contacts and recording some 16,000 non-enforcement interactions with the public.

To further bolster our positive efforts in the CBD, the APD has formed a dedicated eight-member Downtown Unit to patrol the area on bike, foot and with electric GEM cars.

“Nearly 20 percent of our calls for service and workload occurs in the Central Business District,” Chief Bill Hogan said. “This is another way for us to address that call demand.”

The unit, which officially began patrols on July 29, is composed of existing personnel, with the only related costs being to furnish each officer with a bicycle and its associated uniforms and equipment.

The unit’s area of focus is roughly bordered by Interstate 240 to the north; Hilliard Avenue to the south; the roundabout at Woodfin Street to the east; and Clingman & Patton avenues to the west.

“Having eight dedicated officers with a full-time focus on this area will allow us to develop and foster relationships with merchants, as well as with the people who work, live and visit downtown on a regular basis,” Chief Hogan said.

ASHEVILLE, NC – One of the premier dock jumping organizations in the country, ULTIMATE AIR DOGS puts on professional events that draw in thousands of spectators while maintaining a family friendly atmosphere. The shows will take place during the Bele Chere Festival next to the BB&T Building on the corner of College St. and Lexington Ave.

‘Ultimate Air Dogs’ started as a grassroots Michigan dock jumping club, striving to make every single participant feel important, from the smallest Novice jumper to the biggest Ultimate high flyer! That is why the Divisional Finals was created where the top 5 dogs from each division are invited to compete in a Grand Finale! Another way that we put the dog first, is by providing more open dock time than any other organization. Whenever possible participants will be able to practice. If dogs are having difficulty learning, a crew of volunteers will often provide free help between activities. Every Ultimate Air Dog is equally special. All mixes and breeds are welcome!

Dog Registration for this year’s event is closed but you can still come down and witness the action at the following times;

This event is sponsored by The Friends of Pritchard Park, Downtown Asheville Residential Neighbors (DARN), and Asheville GreenWorks. 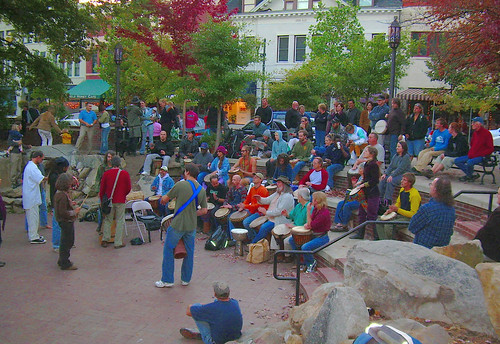 ASHEVILLE, NC – The Asheville Downtown Association (ADA) will present several drums and musical accessories to members of the Asheville Drum Circle on Friday, May 22 at 7pm.

"We are so fortunate have this group of people who create this music in Pritchard Park. The circle encourages participation and we are donating instruments to support their activities," says Byron Greiner, president of the ADA Board of Directors.

The drums donated by the ADA will be available to attendees and passersby to get in on the fun. The largest gift, a 55-gallon dun dun, provides a rhythmic foundation for the group. The association also donated two djembes, an ashiko, a cowbell, three sets of claves and three shakers.

"We’re really grateful for the support of the Asheville Downtown Association and downtown businesses. This donation gives people who come without an instrument a way to connect to the group," says Larry McDowell, one of the event’s organizers involved with the drum circle since its beginning in 2001.

The Asheville Drum Circle cranks up Friday nights beginning about 7pm in Pritchard Park in downtown Asheville. With dozens of drummers and hundreds of spectators, the circle has become one of Asheville’s most popular events.

"The Asheville Downtown Association supports the cultural diversity of our downtown. We encourage all Ashevillians to come and listen or even better join in the fun at the park," adds Greiner.

The Asheville Downtown Association is a membership organization committed to being the voice of downtown. For more information, call 828-251-9973.

ASHEVILLE, NC – Downtown After Five returns to Lexington Avenue at the I-240 overpass on Friday, May 15 from 5-9pm. The event lineup includes Cadillac Jones, DJ Williams Project and featured local Asheville band, Wilsin.

Always free, this year, DTA5 is stepping up with an "Entertainment Stimulus Package" and offering three great bands for one great price – FREE.

Local band, Wilsin, is the opener hitting the stage at 5:15pm. Founded by Asheville’s renowned singer/songwriter Will Hartzog, Wilsin blends a variety of musical backgrounds. The band brings innovation and experimentation to the stage and the result is a soulful sound.

Hailing from Richmond, Virginia, the DJ Williams Projekt mixes soul, jazz, R&B and hip hop to produce an unforgettable live show experience. The band’s members have shared the stage with Dave Matthews, John Legend and Karl Denson. The Projekt will start about 6:20pm.

Headliner Cadillac Jones, a funk-jazz band from Atlanta, Georgia, takes the stage at 7:45pm. Making music together since 2000, the band takes its influences from Herbie Hancock, James Brown and the Blackbyrds. Mixing driving rhythms, tight melodies and improvisational jams, the group creates a sound sure to get crowds moving.

DTA5 gives back to the community by partnering with local non-profits. The charitable organization mans the wristband sales tents and splits the money with the Asheville Downtown Association which produces the event. May’s wristband recipient is the Asheville Area Arts Council. The mission of the council is to enrich the community by educating all people in the Asheville area about the arts, advocating integration of the arts in all aspects of community life, and supporting artists and arts organizations.

Downtown After Five is committed to continuing reducing its carbon footprint. The concert series features biodegradable food and beverage containers, staffed compost and recycling stations, a solar-powered main stage and a complimentary bike corral. DTA5 has decreased its contribution to the landfill from more than 600 bags of trash in years past to just 13 bags in 2008.

Downtown After Five is a production of the Asheville Downtown Association, a membership organization committed to being the voice of downtown. For more information, visit ashevilledowntown.org.

"First Friday" at Grove Arcade to Feature the Sounds of Motown

ASHEVILLE, NC – The popular new downtown series, First Friday, stages its final hurrah at the Grove Arcade on Friday from 5-8 p.m. but with a twist. The April event will feature classic hits and Motown music from two bands, one performing at each end of the historic building. Lively performances from The Rockefellers and Motownblue will fill the Arcade’s historic halls with music to get you moving.

“The First Friday events are definitely family friendly,” says Ruth Summers, Grove Arcade executive director. “The festive atmosphere, fun food and great setting make these events a fun and easy way to feed and entertain your family at the end of the week.”

The Grove Arcade is located at One Page Avenue at the heart of the Battery Hill neighborhood in downtown Asheville and offers unique shopping and exciting dining in one of Asheville’s architectural jewels. Parking is available a short walk away in the Wall Street, Rankin and Civic Center garages as well as on the street. Directions to the garages and the Grove Arcade can be accessed www.GroveArcade.com. For additional information, call 252-7799.